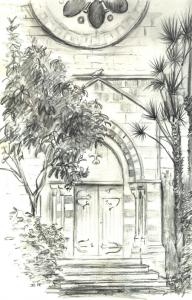 There has been an Anglican Church in Genova since at least 1818. First of all, services took place in the house of the British Consul and during the period from about 1855 – 1869 in a house in Via Assarotti.

The present building, in Piazza Marsala, dates back to 1873 and was constructed according to the drawings of the British Architect George Edmund Street who also designed the Law Courts in the Strand, London. Street was chosen for this project insofar as he was a recognized expert on medieval buildings in northern Italy and President of the Royal Institute of British Architects. In fact both the interior and the exterior of the Church reflect the Ligurian Romanesque style with its black and white stripes, the typical rose-window in the west façade and the ogival arches.

Documents of the period record an estimate on the part of the building contractor for the sum of 7,000 Italian Lire! The stones used in the construction were imported from Arles in France. The windows and the bells were to have come from England: the latter were never hung in the small belfry on the tower since it was thought that their peal could have been construed as a type of offensive proselytism. Records indicate that before the second World War, there were some fine stained-glass windows. but it is not known whether they were of British or Italian origin. 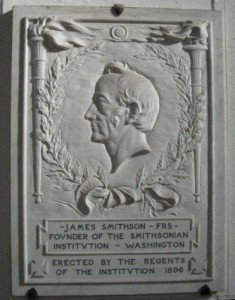 The Church possessed a very important pipe organ which had been given by a German Princess in 1881. During the war a series of fires destroyed the windows, the organ and the roof of the nave. However, the presbytery ceiling with its trilobate vaulting and the massive brass eagle-lectern and are still in their original state, as well as five surviving pews. The marble baptismal font which was on a slender column, survived till the 1990s, when it was toppled over during a concert; hence the sturdier replacement.

On the south wall there is a memorial plaque dedicated to James Smithson F.R.S., founder of the Smithsonian Institute in Washington, who lived in Genoa for the three years prior to his death in 1829. The presbytery is dominated by a resplendent reredos of coloured marble mosaic, which was restored in the post-war period.